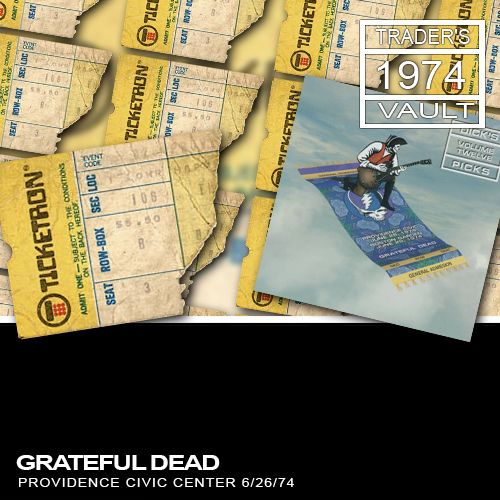 Contributed by John Oleynick (previous d1 from this source had problems, was

-Thank you to Skankweed and John Oleynick for making the SBD available.

-Thank you to Jerry Moore for recording the show.

-Thank you to Rob Berger for making the Audience recording available.

-Thanks to germain for everything;seeding,encouragement,advice and tutelage.

No soundboard circulates for Phil & Ned's Seastones. I have elected not to include it.

It can be obtained here:

** some minor mix adjustments here and there when needed **

The audience recording is slow, an adjustment of about + .3 or.4 will put it in

No noise reduction was used in this matrix.

---The SBD reels seem to be paused between most songs in this set.

---There were mix flucuations and drop outs on the sbd during Big River, I have

attempted to fix these. Drop outs on the sbd patched with the aud. recording.

minute of Black-Throated Wind. The vocals are still some what muffled during this section.

the left. On jam>china>rider the left channel was louder. This was fixed in Sound Forge Pro 10.0.

---There are many mix flucuations during U.S. Blues.

seconds of the aud.

patched with the aud.

---Eyes of The World was at a very low recording level on the sbd. I increased it by

If converted to wav during processing, all tags will be stripped,

however audio data will remain unaffected.

(~);-}
Reviewer: doug_the_dude - favoritefavoritefavoritefavoritefavorite - June 27, 2014
Subject: --
Excellent, rock-solid overall '74; definitely one to initiate a newbie to if you had the mind. Only the U.S. Blues, with those mixing problems, doesn't come off. The rest of it, close to 4 hours long, is essential WOS.

I've had the 2nd set from China Cat on for years, but it's neat to use this matrix in order to get context on all the rest of that. While I enjoy well enough DP12, I think leaving off the WRS from this first set is criminal. That Scarlet ain't half-bad, either (although Donna-haters will have plenty to sink their teeth into early on...)

The entire China Cat > Rider medley is close to 23 minutes, with that opening little jam. To date I think this very well could be my favorite of all time (if you don't count those groove-a-licious '72 Europe versions).
Reviewer: c-freedom - favoritefavoritefavoritefavoritefavorite - June 16, 2014
Subject: I Might as well try
Well the only thing wrong here with Garcia is you don't have a Fire on the Mountain for your Scarlet Begonias.(Another words Jerry is in top form vocally and guitar wise)
As for Weir at this point in 74 he does not have the tunes to go one for one with Garcia.
Some of his tune selections would be double stacked in later years to give them more depth.
I love the sound quality. You can really pick up the instruments. And Donna shines with the slower harmonies.
Not sure why they dropped the Weather Report Suite?
Telling folks to sit down at a show is an exercise in futility.(This was before video monitors)
The biggest thing is just hearing Jerry sing and play his guitar. WOW!!!
Some guy named Phil Lesh is dropping heavy bass tones with regularity as well.
Reviewer: kochman - favoritefavoritefavoritefavoritefavorite - November 26, 2013
Subject: One of the "Best Ever", easily
Big River starts us off with a good tempo, and we start the flow.
BEW is much more interesting, sped up more than a lot of the versions from earlier in the era. This one is great.
BIODTL
Scarlet, nice intro, shaken up a bit by Billy. A problem with the Donna flow moaning as soon as the jam starts... luckily the instruments are doing something so groovy she gets lost and we get to enjoy it. It literally blew a speaker (out the zillion or so they had in the wall of sound).
BTW starts off with a lazy intro. It's a bit slower than I'd like, and a little sloppy. Suprising after that Scarlet. They pull it together a bit more about halfway, and manage a strong finish.
Row Jimmy is predictably slow, but it comes in the payoff. Nothing extremely great here.
Mexicali pumps some life back into the set.
Deal is another fun one.
Race is On rounds out a trifecta of fun.
1/2 Step is nice and country bumpkinny.
El Paso has a more psychedelic intro than usual, which is due to Bob's tone. Holy cow, this one gets crazy! New things are tried, and they are having fun with it. A+.
Ship is at full mast here, it's a must. Great period for a great song.
WRS>IMHBTR gets us some meat sequence action in the first set, always welcome. The opening notes are beautiful. WR Part 1 finished nicely and heads into LIG with a nice head of steam. The first solo break fits the bill. The jam at the end gets a lot more chaotic and disorganized than usual. I'm curious to see how this heads into IMHBTR. It regains some thin semblence structure and
Pretty much an on the dime transition. Not the most orthodox of set closers, but it works for me. A nice chill out after that explosive LIG.

US Blues comes out with hands'a clappin'. Some sound issues here, which is unfortunate. Bob's guitar is the only thing out front. Hard for me to understand where the disconnect was between sets? Shouldn't it just be the same settings? Somewhere after 2 minutes in it's a bit better, but not great. It finally does get ironed out and it's great from then on it.
MAMU comes out in full cowboy glory.
Jam>China>Rider, some hail this as the ultimate C>R. It arised out of a tuning and we end up with an extended intro period where Jerry is just noodling away. Bobby doesn't even start his intro riff until after 3 minutes (plus 2 of intro tuning/jam, for 5 in other words). Great work, and Rider starts just before the 7 minute mark, meaning 6 minutes of Rider jam before the verse. As it should go, it goes from trippy to rocker. So many exist, I'm not sure I can say this is the best, but surely an A+!
Beer Barrel>Truckin>TOO>Spanish>Wharf Rat>Sugar Mags, the other meat. Again a fun tuning precedes the event. Massive Rig here, Truckin continues in the same vein as before. They are pushing tempo and taking chances, love it. After the explosion we get the slower bluesy jam, but it isn't too slow mind you! Hints of TOO come around 12 minutes. Phil has a solo to make things a little darker, and then, Phil bombs to TOO intro, which quickly goes to a Spanish Jam, always a favorite. Correct me if I'm wrong, longest Spanish Jam they ever did? Probably my favorite version of a Spanish Jam because Jerry really goes all over the jamming while Bob maintains the lovely Spanish rhythm. They did invent the guitar folks! Phil tries pushing TOO again just before 7 minutes... Phil, NO! This isn't broken. The two go together like a hand and a glove, but still. Just before 9 we've left theme and go into space for a brief visit. It doesn't go back to the Spanish jam or TOO after that, but just some melodic stuff. Someone mentioned a "Heaven Help The Fool" but I can't confirm because I'm just not familiar enough.
The one the spot transition to Wharf Rat couldn't have executed better! A nice bring me back to earth song. Solid work right before the Pearly's been true living in denial verse. After the Bonny Lee is true one-upper, the head into a "beautiful jam" different from most Wharfs, love it, A+ here.
Sugar Mags coming out of that can't miss, it's a great time to close the set and end the meat sequence, at a pinnacle of awesomeness few shows approach.
E: Eyes as an encore = lucky day! They definitely flirt with Slipknot! for a second in the jam after the last verse. They really keep going back and forth from the quasi-slipknot jam that was typical, rather than a full fledged slip.

The first set has a very relaxed, loose feel about it that is full of spontaneity. The second set is all one can ask for and most every song is up there in the top tier of best-versions from 74.

Any plans for a 6-28-74 Matrix? That would make my year and perhaps some others as well. Thanks again!
Reviewer: SomeDarkHollow - favoritefavoritefavoritefavoritefavorite - April 4, 2012
Subject: The Mind Boggles
First off, I agree that the sound on this mix is quite good. What some may hear as out-of-phase synching between the SBD and AUD I believe is just the natural reverb produced by the arena. To me it just adds depth and feel to the whole thing. Well, if you can just tune out the "SIT DOWN!" butt-hole (if I could I'd take off 1/2 star just because of him).
As to the show, fantastic doesn't do it justice. I'd give it 5 stars just for the Truckin through Wharf Rat sequence alone. Then throw in what Jerry does going INTO Chinacat and you have a true winner...I still can't stop smiling. Some may hear issues with the recording that they just can't get around, but I feel the majority can only benefit from the hugeness lurking within. The show may not be a resounding powerhouse full of explosions and all-around destruction, but the vibe and themes that work throughout the entire show create a true work of art.
Reviewer: Germain - favoritefavoritefavoritefavoritefavorite - March 31, 2012
Subject: No Sync Issues With This Source
Phlesh Wound, you are not hearing sync issues. If you check out the audience source you would notice quite a bit of hall echo with the audio peaking in the low to mid range. This causes its mid range to sound a bit muddy. This matrix picks up some the hall echo, but mid and high range frequencies are well represented, making this significantly cleaner than the audience while at the same time breathing life into the board.
Reviewer: Phlesh Wound - favoritefavorite - March 29, 2012
Subject: Great great show, lousy matrix
Just very very badly out of sync in places, almost unlistenable at times. Don't want to take anything away from this show though, especially the 2nd set and wonderful Eyes encore. Get yourself DP12 or listen to the Jerry Moore audience recording.
Reviewer: BornEasement - favoritefavoritefavoritefavoritefavorite - March 29, 2012
Subject: here... we.... GO.
So you've run all around the Dead world, up to the glittering mountaintops of 77 and deep into the inner folds of 80's spaces. You're spurs jangled through Europe and you heard whiskey-music when the decades changed. 71 was raw, 69 was rawer, you thought you might have lost your mind in 68 but by 73 you didn't mind. All those wide open fields.

But HERE, my friends, my fellow pilgrims, my comrade psychonauts, here is where I rest MY bones. Not a note out of place to these ears, everything so clean and crispy I'd cook breakfast on it. Even Race Is On, which typically I almost despise, is not only tolerable but fun in providence. This is the wall of sound, or as close as we can get. This is IT, the dead on fire, matrixed to perfection. Keith is on, Jerry's on, Bobby's on, Everyone's on.